After an initiatory participation at IoT week 2016 last year through which we created awareness on our IoT architecture concepts, we have bolded our participation to the IoT week 2017 event this year, leveraging on the multiple results and software assets produced by our teams.

We decided to focus our participation to the 7th International IoT Week conference and 1st Global IoT Summit in Geneva (CH) on the interoperation of IoT environments through the symbIoTe core services we have recently released.

Demos to showcase the symbIoTe interoperability in action

The core of our activities in IoT Week has been the demonstration of the second release of the symbIoTe middleware software. We showed how the Level-1 symbIoTe compliance works: two IoT platforms, Symphony by Nextworks and OpenIoT adapted by University of Zagreb have been enrolled into symbIoTe and advertised their resources to the symbIoTe Core Services. We also showed how third party applications can discover IoT resources from different platforms. The demo ran for the entire duration of the event and attracted the interest of many conference and exhibition delegates. We also had the pleasure to showcase our demo to our Project Officer, Dr. Rolf Riemenschneider, Head of Sector for Internet of Things at DG Connect.

Through the demo we have had the opportunity to discuss our solution with many potential stakeholders and representatives from IoT industry (e.g. Forthcode Technologies, Softeco, ITU, TATA Consulting Services, Cyber-AID.org, Easy Global Marketry, etc.). 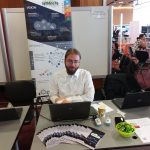 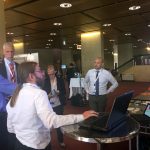 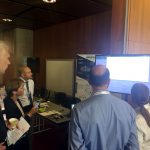 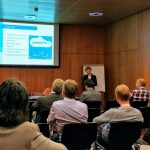 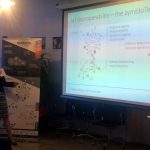 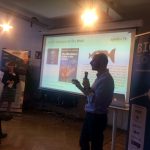 Validating the research approach with the community

Parallel to the IoT Week 2017 exhibition, our team also animated the Global IoT Summit ’17 which was taking place at the same venue. Our Technical Manager, Prof. Ivana Podnar Zarko, presented our solutions for semantic interoperability of IoT objects to a large audience of IoT researchers and representatives of innovative industries. Our approach described in a joint paper entitled “Towards an IoT Framework for Semantic and Organizational Interoperability” has been well received and stimulated interest on our research and code.

We have realized that IoT platform interoperation and cloud-based data processing are hot research topics in our community, which need to to be further investigated together with edge computing, privacy, security and trust, above all in M2M contexts.

Engagement with potential stakeholders for a long term impact

To further exploit opportunities for collaborations with the worldwide IoT community represented at the event, we also participated to the activities organized around IoT week 2017 under the flagship of the IoT-EPI initiative. The four levels of compliance designed in symbIoTe for IoT interoperability have been discussed with entrepreneurs and innovators convened at Impact Hub Geneva, a space where various potential stakeholders can come together to prototype new models for a society that works for all – connecting sectors, industries and cultural background.

With the other six research and innovation projects within IoT-EPI (bIoTope, BIG IoT, VICINITY, TagItSmart!, Agile and Inter-IoT) we had various opportunities to share knowledge about interoperability of IoT platforms and to start discussions and contacts with the worldwide IoT community.

Next IoT Week will be hosted by the City of Bilbao from 4th to 7th of June, 2018. We look forward to our renewed participation at the event next year to showcase our matured Year 3 results, and continue a fruitful and ever-growing engagement with various research teams and the wider IoT community.